The Game of Waitressing: I can’t wait to watch the full version of “Dish,” a documentary about “women, waitressing and the art of service.” “I’m not your servant, I’m just serving you food today.”

Aprons are back! The Los Angeles Times reports on the resurgence of what was once an “emblem of humble domesticity and repression.” “A growing community of self-proclaimed apronistas is seizing the apron back from such dusty, anachronistic thinking.” Sounds familiar.

Eating Disorders on TV: In the voyeuristic vein of the “Celebrity Rehab” and “Intervention,” both the Oprah Winfrey Network and E! are developing television shows on eating disorders. Because of the image-obsessed nature of bulimia and anorexia, the concept of these shows troubles me. The women (and men) featured on them will certainly know that millions of people will be watching and analyzing their bodies, which will create yet another hurdle in their recovery. But maybe the shows will be shot and editing tastefully enough that they will help afflicted viewers at home recognize their own destructive habits rather than teach vulnerable ones how to get the job done.

On “Femivores”: The New York Times stirred up all kinds of talk a while back with this article on the rise of chicken-raising “femivores,” a term they must have invented without much thought to what the word literally means: One who eats women. “The omnivore’s dilemma has provided an unexpected out from the feminist predicament, a way for women to embrace homemaking without becoming Betty Draper.” In These Times posted the reaction from a handful of feminist writers, and I really like the discussion it prompted over on Grist. 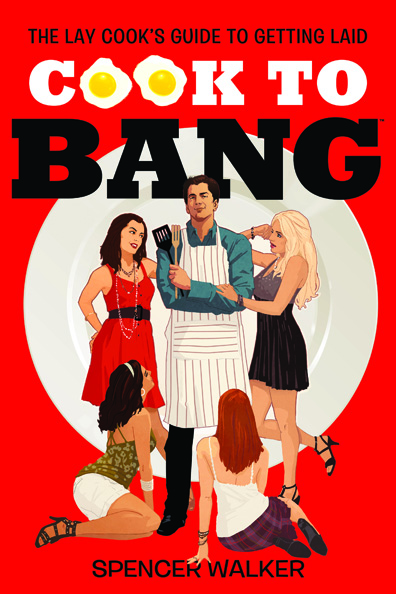 Food, Dude: For all the stereotypes about women and cooking, there are just as many about men, one of the foremost being that they can’t cook and if they do, it’s simply because they want to get laid. Joel Ozersky had an interesting article in Time about the Guy Fieri syndrome, and Gastronomista points us to three books written by men on sex and cooking, the newest being “Cook to Bang” by Spencer Walker, whose cover is so ridiculous I refuse to link to a site where you can buy it. (The fact that Esquire’s Eat Like A Man blog — theme, let’s drink and make sex jokes about cheese! — was nominated for a James Beard Award makes me think they just weren’t looking very hard for nominees. The downfall of Esquire continues…)

Photos from ApronMemories.com and Amazon.

2 responses to “Chatter: Dude food, aprons and a documentary on waitresses”