Liberation through pickles: I loved this post over on Skirt about how traditionally domestic tasks were a form of liberation for early feminists and how they continue to encourage women to be self-sufficient and creative, not to mention to take control of their environment:

My grandmother and mother may not have been “true” feminists, but they still found ways to liberate themselves and their families from the tyranny of high-priced strawberries. What I thought I knew about women changed again. I made my first batch of pickles last year, and they have been a huge financial, emotional, and feministic success…

Mini-domestic corporations are cropping up all over America as women take charge of their homes, careers, and finances, and thanks to decades of feminism, they now have the education to command the domestic realm in ways my mother and grandmother never dreamed possible…Modern feminism’s evolution gives me the best of all worlds.

The yogurt diet: I’m glad I’m not the only one who laughs at the different ways food is marketed toward men and women. Over on Life on Fats, blogger Bree points out that, according to the commercials, if women want to go to Popeye’s, it’s only because they are going to cook, and they can only eat yogurt or Special K if they want to fit into a bikini.

A different kind of White House cook-off: Rather than stir up controversy like a true Harvard-educated feminist should, “Michelle Obama seems to be challenging Laura Bush to a June Cleaver-off; whoever makes the best meatloaf wins.”

Salt and friends: Inspired by Angelina Jolie’s character, Salt, Eat Like a Man lists six other women characters named after foods: Ginger, Peppermint, Cinnamon, Saffron, Pepper. Of course, being Esquire, they had to qualify it as “six beautiful women” on the page title, presumably for better SEO, which clearly made Peppermint Patty’s day. 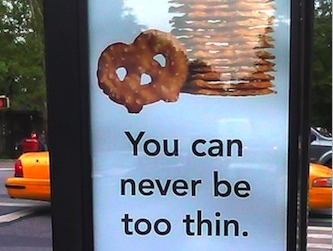 From Jezebel: Hate to break it to you, pretzel company, but you can be too thin.

Food and feminism, from a biblical perspective: I love reading conservative takes on women and food, especially when they make even less sense than my own ramblings. Part one: Clarify that you are not a feminist and quote feminist-leaning foodies. Part two: Display feminist qualities, such as support of an egalitarian household, while quoting bible verses that say women should wake before dawn to provide food for her household. (This blogger, thankfully, points out that the author is more accurately describing food-snobbish yuppies than feminists.)

Frozen freedom: If cooking is such a burden on women, then are processed, frozen meals our liberation? “Why aren’t feminists universally praising the hyper-influx of processed food into our diet?” asks Colleen Hodgetts on Gender Across Borders.