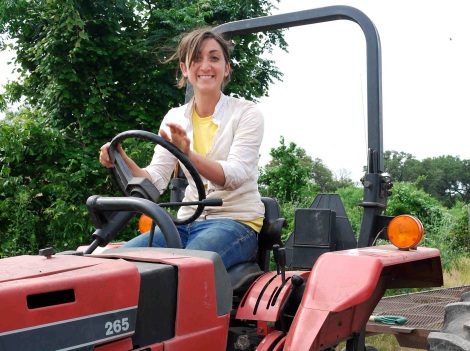 (Editor’s note: This is the first guest post of what I hope to be regular contributions from readers. Neysa King Czerw writes the fantastic blog Dissertation to Dirt about sustainable agriculture, the food system and her and her husband’s adventures in becoming farmers. They moved to Austin last year to work on an organic farm and are in the process of finding land to start their own farm. If you’d like to write a guest post, e-mail me at broylesa@gmail.com.

“It’s not that men aren’t changing how we eat … It’s just that they’re really good at getting all of the press.” This sentence from the introduction of Temra Costa’s “Farmer Jane,” (Gibbs Smith, Layton: 2010) sums up the motivation behind her work. “Farmer Jane” is a catalog and, in Costa’s words, a “celebration” of accomplishments by prominent women in the sustainable food movement. Alluding to women’s natural tendency toward nature, family care, and community, Costa makes the argument that women are a unique force in changing the way Americans today eat. From farmers to chefs, from lawyers to students, Costa presents a cornucopia of smart, independent, and entrepreneurial women who have made tangible strides in their local food systems, and are still reaching for more. 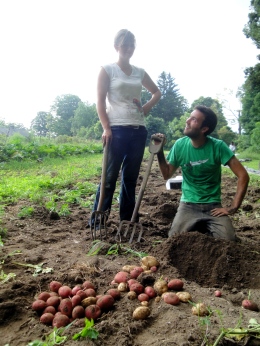 Unfolding these women’s stories, “Farmer Jane” touches on issues of social justice, environmentalism, public policy, food corporations, health, school lunch, and just about every other large issue concerning food in the United States. At the end of every section, Costa gives handy suggestions for how the reader can also become involved in sustainable food.

This focus on women in food is refreshing, as too often male faces like Michael Pollan and Joel Salatin take the sustainability lime light. And because Costa’s self-stated goal is to provide a mosaic of women and food in the U.S., Costa accomplishes what she sets out to do. Yet after finishing the last chapter of Farmer Jane, which highlights the next generation of women farmers, I am left wishing Costa had taken the conversation a little further. These women may be successful in sustainable food, but how typical are they? What challenges have they faced because of their gender? How do they interact with their male counterparts? What hurdles do they anticipate for those who follow them?

In my experience, food production — sustainable, organic or neither — remains riddled with anti-feminist behaviors and attitudes. I am a young farmer who has been working on farms for the past year and a half, first in New York and now in Texas. I have met dozens of farmers — male and female.  I have met even more farm workers and farm apprentices. Whatever the gender or status, the majority has assumed, at one point or another, that I am less capable at farm work than a man.

I remember on a farm where I was employed in New England, a large bed shaper was sitting in the way of a farm vehicle, and it needed to be moved. The farm’s staff was scattered about the fields. The farmer I worked for walked past me, asking for help from “big strong boys.” When she only found two willing volunteers, she walked past me again and called out for a male volunteer who had only been working on the farm for a few weeks, “Hey!  I need a big strong boy!” I watched, wide-eyed from disbelief, as the male volunteer bounded over to her. This “big strong boy” was 17 years old, six inches shorter than me, and probably half my weight. And just so there is no mistake, the farmer making this request was a woman. 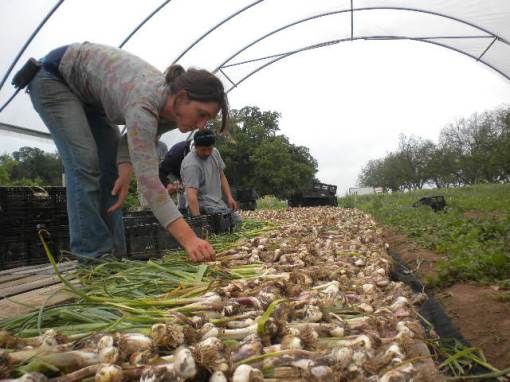 Another day, a male farmer asked me to tighten a hitch to a tractor-trailer. I’d never done it before and wasn’t sure which way to turn it. When he saw me hesitate, he immediately brushed me aside and did it himself. Then, nonchalantly said, “you know I’ve found out that it takes a lot of strength to farm. I was surprised at how much strength it really takes. You have to be really strong.” Great, thanks for the lesson.

I have been walking with bins of cabbage I harvested and had male coworkers take them right out of my hands; I’ve been asked if I’m watching my weight because I wanted to walk behind the harvest truck; I’ve been told to clean a farm’s office because I was “organized;” I’ve had to fight harder and ask more often to get tractor experience. Regardless of how strong and knowledgeable I become, there seems to be no end to these sorts of assumptions. After I have proven myself to the group of men around me, a new one comes along and immediately treats me like an inferior, no matter what his position is compared to mine. And he can do that because of the masculine overtones that prevail in farming — physical strength, efficiency, industry, aggression. As these characteristics are overvalued in farm work, it becomes more difficult for women to be taken seriously by their colleagues. 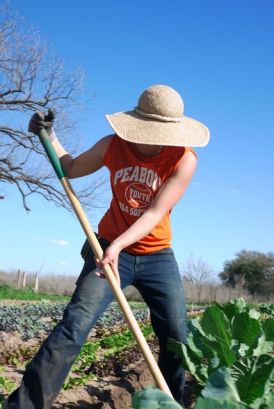 My point with these stories is not just to rant (though it is a little cathartic). It is to point out that women might be driving good food forward, but at the same time we are facing a new (or perhaps, old) set of hurdles in the industry we’re supposedly championing. Those of us who move out of our office jobs, where the battle had once been to prove mental equality with men, are now having to re-contend with what might be the mother of gender inequality issues — physical strength — in an atmosphere that tells women, if you’re not as strong, you’re not as good. I will never be as physically strong as the crew of 30-something men that made up my harvest team on a farm in Texas. But on a day-to-day basis, that made little difference in our ability to perform our jobs. Still, the trope in farming is that more strength — regardless of the amount necessary to perform a task — equals more capability. And as long as that remains a mainstream belief, women will never garner the same respect as men in the fields.

I could go on, but my job here is not to make a case about women’s equality in the field. It’s to analyze the importance of Costa’s piece. And given my own difficulties as a new woman farmer, I found Costa’s expanded list of women in food, although a useful reference and a comprehensive introduction to the topic, a bit unsatisfying. As a complete portrayal of women working in food, I thought it fell short. As Costa herself points out, women in food and farming deserve praise and recognition. Discussing their unique challenges, then, is not only necessary to understand their heroism, but also to educate future farmers about what they can expect as they enter an unconventional, and at times hostile, new career.

3 responses to “Guest post: ‘Me Farmer, You Jane’ by Neysa King Czerw”