Inspired by Mark Bittman’s This #$!% Has Got to Stop, welcome to Sex Selling Food, a series featuring the worst examples of sex/women’s bodies being used to sell food and drink products.

I’m sure Tina Fey would get cackle out of the fact that this Eve commercial played three times on Hulu while we were watching this week’s “30 Rock.”

POM is trying to hook women, too, with one commercial featuring a lust-worthy warrior whose invincibility and bronze body come from eating pomegranates. 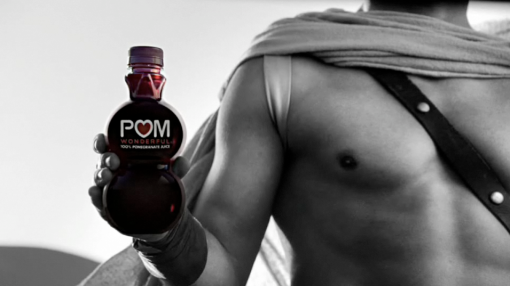 We not only get solid nipple action in the product shot, but also an actor who, by the end, is standing in full-on, ready-to-thrust position.

By now, we’re all thinking the same thing, and it doesn’t have anything to do with that blood red juice.

Like it or not, companies — even woman-owned ones like POM — will keep using sex to sell food because it works. Just ask Padma.

Find an egregious example of sex being used to sell food? Nominate it for the series by mentioning it in the comments or sending an e-mail about it to broylesa@gmail.com.

(Fun fact: “Granada,” like the city, is the Spanish word for pomegranate, which explains why grenadine is what we call pomegranate syrup.)