(Editor’s note: Jenni Sunde is a freelance fashion writer and pop culture junkie. As one of the editors of a fashion careers blog, Jenni specializes in all things fashion-related. With her love of art and all things beautiful, she delights in sharing her sense of style from her closet to your computer monitor. If you’d like to write a guest post, e-mail me at broylesa@gmail.com.) 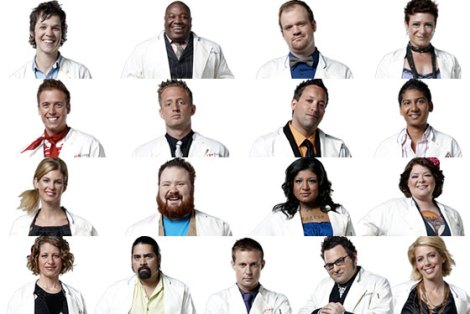 There are a number of female chefs heading up the best kitchens around the world, but why is it that women are not getting the recognition they deserve on various cooking shows on television?

Since the incipience of the Food Network’s “Iron Chef America,” Cat Cora remains the only female in their “veritable pantheon of culinary giants.” With the same lonely numbers plaguing the women who compete against men for the title of Food Network’s “Chopped Champion,” both of Bravo’s culinary competition’s “Top Chef” and “Top Chef Masters.” “  Top Chef” has received two Golden Globes, and since its inception in 2006, has spawned several copycats on various networks. With its power to showcase culinary talent, the mystery remains: in its eight season run, why has there been only one female winner?

Stephanie Izard is the lone female winner, including the two completed seasons of “Top Chef Masters” and one season of “Top Chef: Just Desserts.”

Has the professional kitchen has become just another bastion of gender politics?

“I feel like we’re more attached to certain things,” says the chef who was a semi-finalist of season eight (the “All-Stars” season). “Certain people mess up as much as anybody else, but for us it’s an emotional thing,” she said after yet another male victory on “Top Chef.”

For us it’s an emotional thing?

Was she speaking of “us,” as in all of the chefs or was that just an inadvertent gender-bias faux pas blaming women’s “feelings” as the reason female chefs are prone to “mess up”? “Top Chef” is a competition to see who could produce the best meal, not a contest to decide who was more emotionally involved in the process.

Since the dawn of time and the discovery of fire, it has been the accepted balance in a kitchen that men bring home the bacon and women cook it. With the emergence of the women’s liberation movement, women have sought to erase the black-or-white attitude toward socially established gender roles and pushed men to, among other things, learn how to cook the bacon themselves.

This is where ego comes in. Women have always cooked because they had to, but now men cook because they want to. Often, it’s not done as an act of nurturing, but rather a act of showmanship. (After all, if you can cook well enough to make it on “Top Chef,” you get to watch yourself on television. What an ego boost.)

Since the beginning of time, food has been centered on more than just the feeding of one’s body. Cooking has been and still is a way to nourish our souls and relationships around the dinner table. For most female chefs, this is still at the center of their core values in the kitchen. And because of this, women tend to use their hearts to deliver their best dishes. The Top Chef competition is intense, and can at times seem overwhelming. With such pressure put on contestants the kitchen can get a little heated, and when its hot a woman knows when to get out of the kitchen.