The central charcter of James Cain’s 1941 novel of the same name is a sexually liberated divorcee who owns three restaurants in the Los Angeles area during the Depression.

By specializing pie and fried chicken — and booze, when Prohibition ended — Mildred blossoms into a wealthy working class entrepreneur with far too much generosity and tolerance for a bratty teenager.

With men, she was for the taking. With Veda, the daughter played by Evan Wood in the miniseries that aired last month, Mildred was blindly enamored. 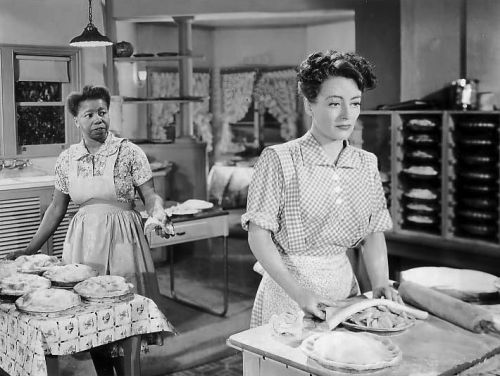 I haven’t seen the miniseries or the original movie, but the Todd Haynes version — you’ll remember him from “Far From Heaven” and “I’m Not There” — apparently follows the book much more accurately than the 1940s version. (Zap 2 It points out three other ways the films are different.)


The Mildred Pierce in the book and new miniseries is a lot like Keri Russell’s character in the 2007 film “Waitress.” They are both hard working women who find themselves in a predicament that involves love and pie, but are they feminists?

I’ll leave the “Waitress” post up to my friend, Tolly Moseley, who has had dibs on it since before the Feminist Kitchen was even a reality.

But I’ll give you my take on Mildred Pierce, whom the 1945 film described as “a woman who refused to live by the rules”: It’s pretty easy to lose your feminist card when you allow yourself to have such a demented relationship with your daughter.

Veda is her mother’s downfall, but her parents are to blame for creating such a monster in the first place. Ultimately, it’s Mildred’s fault for allowing herself to be so manipulated and deceived by her offspring.

In every other area of her life (mostly), Mildred tackles problems head on and has no problem challenging the status quo. She thrived financially in the most difficult economic years of the century, but an unwillingness to stand up to her own daughter caused her empire to crumble.

We all have our weaknesses, which in life, we aim to overcome, but Veda is Mildred’s Achilles heel. The ultimate weak point that when tapped the wrong way triggers a self-implosion. You defend it, you protect it. In the back of your mind, you know it’s there even though you might not be able to put your finger on exactly where it is.

No matter how sexually liberated or business savvy you are, you have to know when you are being taken advantage of.

Otherwise, whatever is preying on you will just keep taking until there’s nothing left to take.

That doesn’t sound like much of a feminist to me.

9 responses to “Is Mildred Pierce a feminist?”