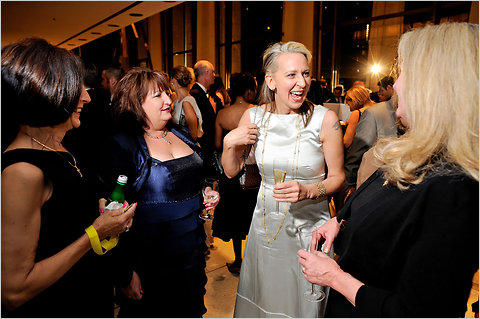 Every year, the perennial complaint I hear (and have made) after the James Beard Awards is the lack of female chefs who are nominated.

Josh Ozersky has this to say in a piece for Time magazine (in which he also admits to licking his own wound for not winning his own James Beard last night):

The Beard Award was really given for her memoir — and all the press and attention she garnered with it. As with the Oscars, marketing and name recognition can be more important than merit.

I have no idea whether her cooking is worthy of a James Beard award, but I wonder if we’d be talking about merit if she were a he who was the underdog. She’s the first female to win the award since 1997. (Even though he was openly gay, James Beard succumbed to stereotypes about women long before the awards started.)

Four other women won the coveted awards last night, but five isn’t a number to get too excited about when you consider there are 23 categories in all, Kim Conte reminds us on the Stir.

I’m far enough from the New York food scene that all I can comment on is the media exposure and hype, both of which Hamilton most certainly had the most of, but I wonder if we can’t just let her win and trust that the judges saw something extraordinary in her cooking.

(Besides, I’m still trying to figure out exactly what Florence Fabricant meant in her post over at the New York Times when she said that Hamilton’s thank you remarks — “All you have to do is open a can of sardines and a box of Triscuits, call it a signature dish, and you get Best Chef New York City” — were a “cold shower.”)