(Editor’s note: This is a post from Caroline Jann, aka @gastronomaustin, the Austin cook/writer who is helping coordinating the Feminist Kitchen book club + film series that starts this week. ) 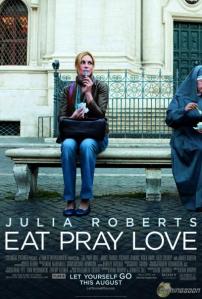 When I first saw “Eat Pray Love,” I was at one of the Austin theaters where you can eat and drink throughout the screening, and I remember leaving the theater more satisfied with my meal and the movie.

It wasn’t horrible, but I’d seen better.  The main character, Liz, seemed much too clueless for her age and stage in life and I didn’t find the resolution to be satisfying. After an entire year of full-time reflection, Liz ended up attaching herself to yet another person. This fresh perspective on life didn’t seem very revelatory to me.

So why in the world would Addie and I pick “Eat Pray Love” to launch our Feminist Kitchen book club + film series? (It kicks off at 7 p.m. on Tuesday, Aug. 9, at Thrice, 909 W. Mary St. No need to bring anything, besides a few dollars for a snack or beer/wine/agua fresca from Thrice or Thai Fresh. If you can’t make it, you can join in on through a live chat on this blog.)  Although the film as a whole leaves something to be desired in my opinion, there’s a reason why Liz’s character and the conflicts she’s trying to overcome resonate with so many millions of women who bought the book and flocked to theaters.

(Speaking of buying books, I’m happy to announce that Book Woman is on board as our featured bookseller. Look for details and discount info on the book club homepage.)

As Addie mentioned in her earlier blog post about this film, food becomes Liz’s highest priority in Italy. What role did dropping her food inhibitions have on Liz’s path to self discovery? She allows herself to lust after food but not men, but is her fiery passion for cibo italiano just as cathartic as the new romance that pops up later in the film? And why can’t we see a women be both sexually and culinarily fulfilled at the same time? It will be important to address the fact that Liz is an upper class white woman with enough free time and money to run to Italy for the sole purpose of finding oneself through gelato.

By looking at the contrast of cultural values portrayed in “Eat Pray Love,” we can start dissecting our own country’s concept of what is acceptable for women when it comes to food, cooking and gastronomia.