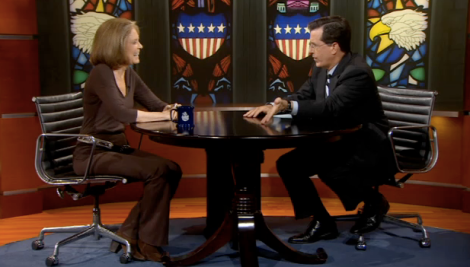 Gloria Steinem is making the rounds in the press right now ahead of the release of a new HBO documentary, “Gloria Steinem: In Her Own Words,” that premieres on Monday night. An article on The Daily Beast has a nice overview of her life in the past half century and tells us what’s not in the movie (eg, “how her father’s obesity engendered in her an almost pathological fear of food that continues to this day”), but I really connected with this piece on Huffington Post by Sheryl Sandberg. Sandberg expresses her gratitude for Steinem’s work, even though Steinem explicitly states that she doesn’t want it. “She even quotes another feminist icon, Susan B. Anthony, who declared, ‘Our job is not to make young women grateful. It is to make them ungrateful so they keep going.’,” she writes.

And how do we move forward? In the documentary, Gloria offers the following advice to young women. “Listen to the voice inside you and follow that,” she says, adding “The primary thing is not that they know who I am, but that they know who they are.”

I’m sure her interview with Stephen Colbert on the Colbert Report tonight won’t be quite so sentimental, but I’m sure it’ll be just as relevant. You can see her previous appearance here, and here’s the link to Thursday’s clip.

I have nothing but respect for Gloria Steinem. At 77, she’s tackled issues that seemed insurmountable to others. She’s tackled every hurdle thrown her way with intelligence and grace. The Feminist Kitchen probably wouldn’t exist without her. So, thanks, Gloria.