You don’t have to be lonely old Eleanor Rigby to be buried along with your name.

After Mary Jane Murrell raised her eight children, she took in two of her grandchildren when alcohol and fast men proved too tempting for one of her daughters. Bessie Ellen Gravatt, who outlived her son by a year, surely ate an orange slice gummy on the day she fell and broke her hip and never recovered. (I was seven when she died, so I remember sneaking those same orange gummies every time I visited her.)

No one knew that Sara Goldsbury was Jewish until her widower, James Thomas Murrell, my great-great-great grandfather, was on his deathbed. I haven’t pinned down exactly when Addie May Gravatt died in Salem, Mo., but two remnants of my great-great-grandmother on that side of the family remain: The story of the time that Addie May, “a huge Church of God preacher,” which is how she is described in family lore, passed out at the pulpit and had to be taken to the hospital in a flat bed truck; and her name, which has been my nickname since before I was born.

With every generation that passes, the very names of these women are at risk of being forgotten forever, much less the stories of the lives they led.

Two seemingly unrelated side projects have been taking up a lot of my time lately: filling out my family tree using Ancestry.com‘s cool (and free) digital genealogy tool, and putting together the first Austin Food Blogger Alliance community cookbook, which is slated to come out next year.

Last month, I wrote this Feminist-Kitchen-esque blog post over on the AFBA blog about why we are doing this community cookbook in the first place.

In that piece, I wrote about this community cookbook, which is one of my neighbor’s most treasured possessions. 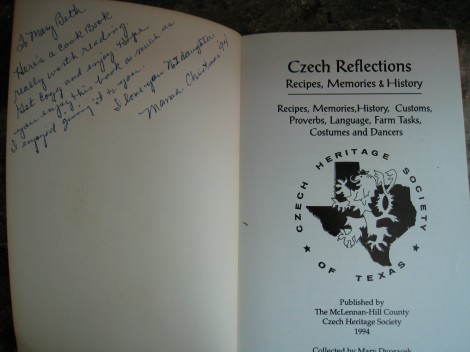 The owner of this copy of “Czech Reflections” doesn’t have any children herself, and I might be the only person in a decade who asked her to point out which recipes were her mother’s and which were from her dad’s mother. This, of course, led us to talking about how her parents met and how her dad’s mom taught her own mom, who couldn’t boil a pot of water when they got married, to be one of the best cooks in the county.

I’ve been talking a lot lately with my maternal and paternal grandmothers, who are 81 and 86, respectively, about our family histories, and sometimes the best way to get them talking is to ask them questions about food and cooking.

Talking the other day with one of my grandmothers about how she used to bury eggs in a wooden box of salt to preserve them led to both of us in tears, facing a difficult conversation that needed to be had. My other grandmother’s stories got a little more tepid after we touched on the time after her father walked out on her, her mom and her brother when she was just a kid.

Emotions are tied up in the simplest things, but documenting them taps into something deep within us, a reverence for the things we know and the things we wish we knew.

For instance: I know that one of my great-great-grandmothers carried this bread knife with her on a boat from Visby, Sweden to the United States in 1894. My grandmother still uses it to this day. (A few years ago, I wrote a whole column about this knife and how to use food to help tell family histories.) 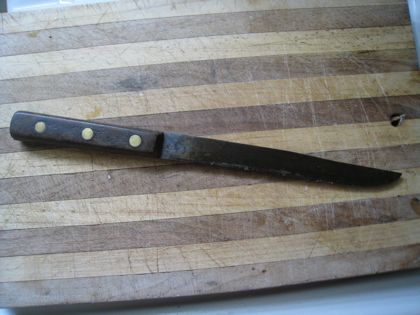 What I don’t know is what went through that great-great-grandmother’s mind during the 10 years that she was waiting on an island in the middle of the Baltic Sea for her husband to return. He’d left her with a baby and another on the way to find a new life for them in Springfield, Mo. When he came back to get them, he finally got to meet his 10-year-old daughter, my grandmother’s aunt. 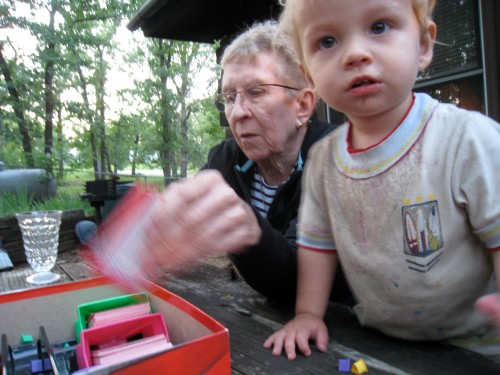 While on a recent trip to Oklahoma to meet up with my parents and grandmother, she and I made some time to go through her mental family tree so I could record as many dates, facts, memories and quips about as many family members as she could recall. A few weeks later, on Mother’s Day, in fact, I entered all that data into the growing family tree that now has more than 100 entries, people who are much more than their birth and death date. I might not ever know any more than those facts, but any detail, even simply a name, is better than no detail.

I hadn’t really thought about this exploration into my family history as an act of feminism until I looked into the eyes of the women in this picture that happened to be hanging in the bathroom of the cabin we rented that weekend. 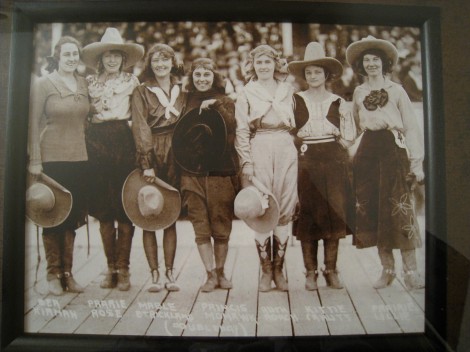 I have no idea when or where this photo was taken, but by the look of their clothes, the smiles on their faces and the fact that their first and last (or maybe middle) names are inscribed on the image itself, I get the feeling that these women were trailblazers for their time. I couldn’t help but wonder: Who is carrying on the stories of the glass ceilings they had to break to wear cropped pants and hats as big as their personalities? 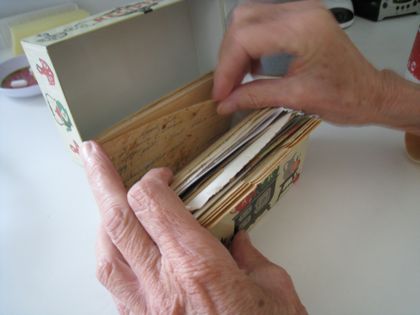 Just like you can only capture so much in a picture, handwritten, splattered recipe cards only hold so much information, but when those recipes are compiled with stories from the contributors, in the form of, say, a community cookbook, we have a little bit better of an idea of the how, who and why behind the what.

Each of the recipes I’m submitting to this AFBA cookbook (my great-grandmother’s coffeecake and Ian’s linguini and clams) says something about my own culinary heritage (my grandmother remembers her mother serving that coffeecake to other Swedish immigrants in Springfield in the 1930s) and what dinnertime on a random weeknight looks like in my house now (where Ian is just as likely if not more to be doing the cooking).

Technology allows more people to record and tell stories now than ever, and I’d like to think that blogging will help future generations hold on to the stories of the people who came before them. This also means that we get to help preserve the stories of those who didn’t have such an outlet or who didn’t think their stories were worth telling in the first place.