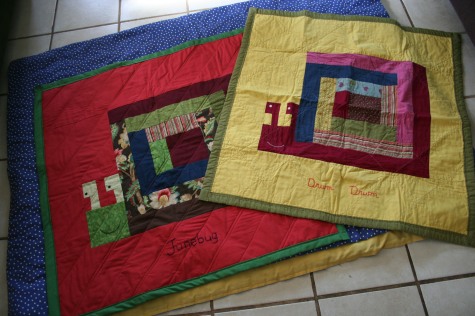 It’s been two years since I finished my first quilts, which included that snail quilt on the right for Julian.

Over the holidays, I finished my most recent project — the snail quilt on the left for my sweet little niece June, who lives in Idaho.

My little boy turns six this weekend (!), so he’s not exactly a baby, but these baby quilts (this log cabin snail pattern is from Dare To Be Square Quilting) are a nice project for a sometimes quilter like me.

I might not have time to tackle bigger projects than these, but I’m totally and utterly fascinated with the history and evolution of quilting. In the past year, I’ve been to the relatively new Texas Quilt Museum in La Grange (twice) and the Capital of Texas QuiltFest last fall.

While researching that quilt show for a story in the Statesman, I found out that the Modern Quilt Guild, an association of more than 100 guilds in cities around the world, picked Austin as the host city for QuiltCon, its first international show.

The Modern Quilt Guild has grown so quickly in part because of blogs and social media, especially Flickr, and it’s amazing to think that some of the world’s best quilters will be coming to Austin for this QuiltCon event. If you think of quilting as a dying craft, you’re missing out on some really incredible pieces of art.

It’s interesting to think about the similarities and differences between the act of putting together a meal and that of putting together a quilt. Both have long been considered women’s work, and it’s nice to see American culture finally start to give more value to at least one of them. (I’m new to the quilting world, but it doesn’t seem like quilting is getting its due respect just yet.) Though we have to eat every day to survive, the same cannot be said about sewing, and after food is consumed, there’s not much to show for it. A quilt, on the other hand, might take hundreds of hours to complete (perhaps the same amount of time one spends cooking over a six-month span) but in exchange for that commitment, you have a tangible object that not only can you use but also pass down as a relic of your effort and skill.

I can’t tell you how many times in the past few years that I’ve been moved to tears while looking at quilts at the La Grange museum, the quilt show last fall or even from an almost forgotten trunk in some upstairs closet at a house I’m visiting. There’s something incredibly intimate about looking closely and admiring the stitches and carefully cut pieces of cloth that some person, usually a woman, poured her heart into, either for someone she loved, for someone who was going to pay her for her work or for her own self-gratification.

Maybe I’m just too caught up in the food world for my own good, but I can’t remember the last time that eating a bite of food stirred up so many emotions.

One response to “Outside the kitchen: Quilting my little heart out, looking ahead to QuiltCon”