Saturday’s “Fried Green Tomatoes” book club got me thinking about the Whistle Stop Cafe, the restaurant that Idgie and Ruth run in the book that plays an even bigger role in the movie.

The restaurant is the primary source of income for their nontraditional family in what at first seems like a stereotypical rural town in the South in the 1930s and 1940s.

But as the story evolves, we learn that the cafe is a utopia of sorts, where anyone can come to get food, love and a little bit of nurturing, no matter their race or class. Everyone from middle class white patrons to blacks who live across the railroad tracks and hobos who live on the tracks themselves can come to get a meal from women who take great pride in the community caregiver roles they have assumed. (Idgie and Ruth had to serve black patrons out back, but the white homeless guests could eat freely inside.)

In turn, the women earn the respect and love of the community they serve, despite cohabitating and coparenting in a same-sex relationship during a time and in a place not known for its acceptance of homosexuality.

We spent a lot of time in the book club get-together talking about the nature of their partnership. As a kid, the thought never crossed my small town mind that Ruth and Idgie were madly in love. The book gives even more hints than the movie that they are indeed a couple, but author Fannie Flagg, for whatever reason, didn’t overtly explain that they were physically intimate or that they longed to be married or officially espoused.

(One guess was that her lack of detail about their relationship was her way of normalizing their sexuality instead of making it as big a focus as, say, the racial division of the time and the unification found in Whistle Stop. Another keen observation was that Idgie and Ruth’s food fight in the movie was essentially a sex scene, including foreplay and release, but without the nudity.)

But even without confirmation of whether or not Ruth and Idgie were lovers, they were a collaborative force to be reckoned with and whose selflessness for their community, in particular to those less fortunate or maligned by society, knew no bounds. The cafe was a place where wrongs were righted and where threats to a peaceful existence of equality for all, regardless of race or gender, were merely threats.

As the town faded, sadly, so did the cafe, but the joy of “Fried Green Tomatoes” is that Ninny and, in turn, Evelyn, cared enough to keep Idgie and Ruth’s story and their values alive. Sixty, seventy, eighty years later, we still seem to struggle with the idea that America can be a place where people accept each others’ differences and defend our neighbors against wrongdoing, no matter which side of the tracks they live on.

It’s an idealistic Kool Aid that I’ve been drinking for far too many years now, and one that is sometimes too sweet for a palate that has turned somewhat more cynical with age.

After all, I’m a middle class, educated white woman revisiting a story written by another writerly white woman, who was probably also all too aware of the traps of reducing black-white-gay relations to a feel-good tear-jerker. (To see my full-blown naivete on display, check out my initial reaction to “The Help,” a post I still stand by but with a better understanding of how my race buffers me from the shortcomings that many in the black community found.)

But talking about the virtues of that Whistle Stop Cafe rejuvenated my hope that we learn lessons through movies and books like this about standing up for what’s right and equality for all, a phrase so overused it feels cliche to use here.

A egalitarian utopia where a person can lead the life they want, with whomever they please, and where, when a friend who happens to have skin of another color has a dying daughter whose last wish is to see an elephant, you figure out how to walk all night to bring her an elephant. 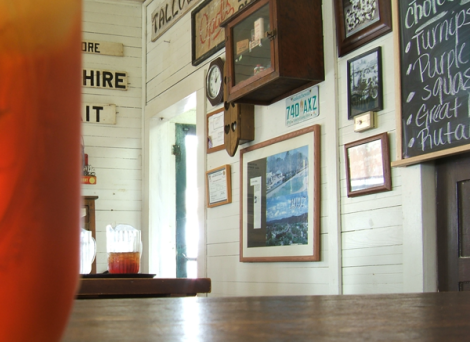 (That scene didn’t make the movie but it’s worth reading the entire book for. And yes, the Whistle Stop Cafe is a real place, above, though I cannot attest to its utopian state.)

Next up for the book club: Michael Pollan’s “Cooked” on Oct. 8. Yes, that’s smack in the middle of the two ACL weekends, but we’ll deal with it.

One response to “Book club: Believing in the Whistle Stop Cafe”