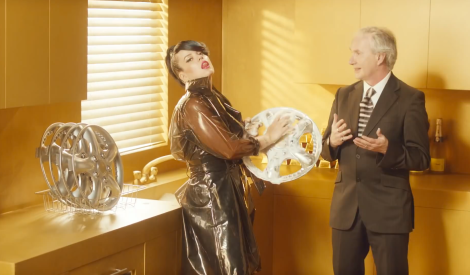 Two videos to get you thinking about body image this week.

The first is Lily Allen’s latest video for her super catchy single “Hard Out Here,” which came out weeks ago and stirred up all kinds of commentary and (perfectly valid) criticism, especially with regard to race.

“You’ll find me in the studio and not in the kitchen…Don’t need to shake my ass for you because I’ve got a brain,” but then she goes on to do just that alongside a group of mostly African American women twerking, sometimes in slow motion and with champagne. (In fact, though there isn’t any nudity, the video is probably NSFW. Well, and the repetition of “bitch.”)

Special K’s latest ad campaign is about fighting “Fat Talk,” those self-deprecating thoughts and words we use to talk about our bodies.

The first video challenges outsiders who push expectations on us, while the other combats the learned inner dialogue that is perhaps even more damaging. As much as I love Lily’s Allen’s brilliant lyrics, the imagery in the video is problematic, and even though I love Special K’s attempt to get us to silence the self-hate, at the end of the day, they are trying to sell cereal that they also subtly (and sometimes not-so-subtly) push as a diet food.