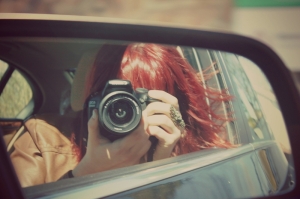 Facebook is Narcissism in its Purest and Greatest Form.

That’s how I felt about Facebook when I first (reluctantly) joined, 10 years ago this month.

That’s also the name of the first group I created, complete with a photo of a woman taking a photo of herself in the rear view mirror of a vehicle.

A quick search on my timeline shows that on Feb. 11, 2005,  my penultimate semester in college, a friend from high school, Brian Pettegrew, left what appears to be my first wall message. “”Hey, I’m leaving you a wall message!” he wrote.

“Is the future really going to be this banal?,” I remember thinking.

But I logged on anyway, fat with the cynicism of seniority but curious about what could inspire such pandemonium, and started chipping away at this so-called social network.

I don’t remember what I posted on other’s walls, but I remember friending people after parties and creating other groups that mocked the site.

One was simply called “Pomegranates.”

Another, in protest of a Starbucks opening right next to campus: “Go away, Starbucks on 9th Street…your overpriced commercial brew will never touch my lips.”

I nearly published another group that hinted at illicit activity inside school buildings but had the foresight not to hit publish. It might have been 2005, but I knew that the Internet had the power to hold onto things for eternity.

(Wise decision on that one, Addie.)

But it’s that first one, “Facebook is Narcissism in its Purest and Greatest Form,” that is most interesting to me now as I look back on a decade in this virtual reality.

Here’s the “About Me” description, sic:

“What’s the point of Facebook and the rest of these social media sites? To show how much you love yourself and how much you are loved. This group is for everyone out there who hates thefacebook (sic from 2004 facebook lingo) as much as you love it and acknowledges that there is a beauty in narcissism.

You love yourself. That’s OK, now get over it.”

I think I might have been the only member.

I tried to continue mocking Facebook for as long as I could. The buy-in came slowly.

Posting started to feel more natural. Liking posts didn’t feel so cheap. Sharing photos became less scary. Making myself vulnerable online on Facebook was no different than doing so in a blog, column or even networking at a party.

I found out that, just like in real life relationships, you can be as fake as you’d like to be on The Facebook, with equal consequences. Make an asshole comment on someone’s rant, you’ll get it back threefold on your own page. But if you bring authenticity to the Facebook version of you, you manifest it offline (especially if you go out of your way to cross physical paths with people you interact with online, I’ve learned).

I liked finding out that my childhood neighbor friend ended up marrying that girl I played volleyball with. My life is better off because I get to see regular photos of the kids who fill my friends’ lives with joy. The niece and nephew whose day-to-day lives I can be part of without having to be on the phone with my sister for 15 minutes a day. (Not that I’d hate that. I love gabbing on the phone.)

It was heartwarming to see another acquaintance from high school make it through a difficult time with her son’s medical condition as a single mom with a positive attitude. I hardly knew her in school, but we reconnected at a reunion and I was really rooting for her.

Now, her pictures pop up in my timeline every now and then and I think of her and her kiddo. I see when they are doing well and I’m happy. She has a rough day and I feel a minuscule pang, too.

It’s tough being a co-dependant in a place like Facebook, where everybody is doing nothing but expressing their feelings all goddamn day.

And here I am, 10 years later, still expressing my feelings on Facebook and I’m still coming to terms with it.

We all spend way too much time on there. Human connection is a good thing, and but even that needs to be moderated, it seems.

I don’t meet many people who aren’t on Facebook, but there’s one in particular who has interested me lately. With family, a busy job, a bevy of interests and exactly the social playground he enjoys, he has no need to even dip a toe in that waterfall of emotions and information. He’s at peace with it as much as he’s at peace with a lot of things, which is a lot. I can’t help but think there’s a connection.

I’m not going away from Facebook anytime soon, but it has me thinking about that narcissism and over-engagement I worried about when it first came into my consciousness.

With those worries sitting in plain sight in the middle of the room, I can also say that my life is enriched by seeing an old roommate’s smiling face on a beach somewhere warm. My heart swells when I like photos of babies I’ll never meet. I send out a prayer when I learn of the death of a dear friend’s grandmother.

It’s weird to show everyone I’ve ever known, including that one kid I met over a keg at a party at Mizzou and never saw again but not this new friend I see a whole lot more, the crazy hair my kid had going to school the other day, but it’s a way for each of us to say, “Hey, I’m doing OK.”

And even if you’re not doing OK, they, Those Asshole Narcissists of Facebook, can help you make it feel like it’s OK.

2 responses to “Ten Years on Facebook, and Everything I Feared About It Is True”